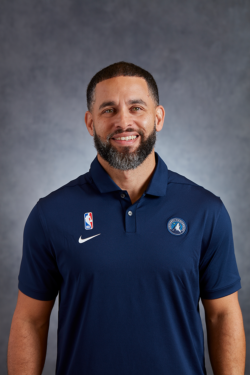 Bill Burgos enters his first season as Timberwolves Head Strength & Conditioning Coach. In this role, he oversees the development and implementation of the team’s strength and conditioning programs.
Prior to joining the Wolves, Burgos was Head Strength & Conditioning Coach for the Orlando Magic from 2013-2018 and held the same job with the New York Knicks from 2011-13. He began his career in the NBA as Strength & Conditioning Coordinator for the Magic from 2009-11. Burgos was President and Founder of Burgos Consulting Group LLC providing services as a Human Performance and Player Care Consultant from 2009-19. He is currently an adjunct professor at Austin Peay University, teaching on-line courses in the fields of sports science, strength and conditioning, and sports medicine.
During his time in the NBA, Burgos has served on the Jr. NBA Leadership Council, the NBA Sports Science Committee and the NBA Gatorade Advisory Council. He is a member of the National Basketball Strength & Conditioning Coaches Association, serving as President from 2015-2018. Burgos has bachelor’s and master’s degrees in Exercise Science from Austin Peay University. He also has a master’s in Human Movement from A.T. Still University and is working towards a doctorate in Health Sciences, Leadership and Organizational Behavior from ATSU.
Burgos served a total of 13 years in the Army and Air Force. From 1994-98, he served as a law enforcement officer in the Air Force. He spent the next four years (1998-2001) in the Air Force Reserves as an emergency medical technician. From 2001-04, Burgos was on Army active duty as a petroleum specialist with two deployments – to Afghanistan in 2002 and to Iraq in 2003. He then returned to the Air Force Reserves from 2004-07 as a medical technician. A self-described “Army Brat,” Burgos was born in Weisbaden, West Germany. He and his wife, Noemi, reside in Lake Nona, Florida with their daughter, Cynthia (22) and twins, Jesus and Joel (18). Burgos also has a daughter, Atia (27).